Despite unimaginable obstacles, the Bar-Kays have endured as one of the longest-running funk and soul groups ever, while their talents as a backing band can be heard on some of the most popular albums of the ’60s and ’70s. In their earliest incarnation—more than 55 years ago—the band proved the power of determination, working tirelessly to earn their place at Stax and perform alongside one of the label’s biggest stars. But when tragedy struck, the remaining members of the group were forced to channel that passion to reimagine what—and who—the Bar-Kays could be.

The Bar-Kays were formed in the mid-’60s by Memphis teenagers Ben Cauley (trumpet), James Alexander (bass), Jimmie King (guitar), Ronnie Caldwell (organ), Phalon Jones (saxophone), and Carl Cunningham (drums). Standing out as one of the region’s few integrated groups, the instrumental sextet developed their skills at local clubs, while Cauley gained foundational experience in the studio at Stax, recording horns for artists like Carla Thomas and Rufus Thomas. But the high schoolers yearned to be a permanent fixture at the local label and, despite several failed auditions, persisted in their quest.

Finally, in 1967, the Bar-Kays impressed Stax’s team with their playful and funky original tune, “Soul Finger.” The song not only marked the group’s debut single but also their first big hit—landing in the Billboard Hot 100’s Top 20 and peaking at No.3 on the R&B chart that spring.

The Bar-Kays also made an impression on Stax’s marquee star, Otis Redding, who hired them as his touring band. While the young musicians’ parents were concerned about the group finishing school, Redding made special arrangements so that they could continue their studies. “Otis loved those kids so much,” Redding’s widow, Zelma, told Robert Gordon in Respect Yourself: Stax Records and the Soul Explosion. “One of the reasons for getting a new, bigger plane was so the Bar-Kays could tour with him and he could get them home on Sunday night or Monday morning so they could go to school.”

With their debut album, Soul Finger, recorded and primed for a July release, the Bar-Kays set out on tour, enjoying the rarified excitement of playing alongside one of the country’s most popular performers. Then, on December 10, 1967, the unthinkable happened. A plane carrying most of the band members, including a 26-year-old Redding, crashed, killing seven of the eight passengers. Ben Cauley was the sole survivor. James Alexander had not been on the plane.

Following funerals for their friends and colleagues, 20-year-old Cauley and 17-year-old Alexander were left to pick up the pieces. Finding solace in music, the duo chose to channel their devastation and rebuild the band, adding organist Ron Gorden, saxophonist Harvey Henderson, and guitarist Michael Toles. This time, they also enlisted a vocalist, Larry Dodson, as well as two drummers: Roy Cunningham (brother of the late bandmember Carl) and Willie Hall. By the end of the ’60s, the reformed Bar-Kays had recorded a new album (1969’s Gotta Groove) and were backing some of Stax’s biggest acts, including Isaac Hayes. Under Hayes’ wing, the Bar-Kays appeared on such legendary albums as Hot Buttered Soul (1969), Black Moses (1971), and the GRAMMY® and Academy Award-winning soundtrack to Shaft (1971). 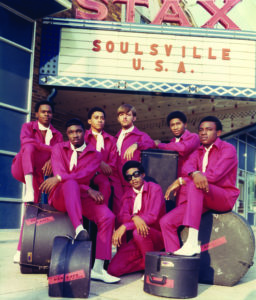 With the turn of the decade came a shift in personnel, including the departure of Cauley, in 1971. But Alexander and his new bandmates continued to grow, scoring a Top 10 R&B hit with 1972’s “Son of Shaft,” and releasing a string of acclaimed albums, including 1971’s Black Rock and 1972’s Do You See What I See? At the legendary Wattstax Festival, the group proved their prowess as a standalone act—and by the time that Stax closed its doors, the Bar-Kays had evolved into a high-energy funk band.

Despite a revolving line-up over the years, Larry Dodson reigned as the band’s frontman until 2017. Original member Ben Cauley (1947–2015), meanwhile, enjoyed a long and fruitful musical career following his time with the Bar-Kays, in which he performed with such legends as Keith Richards, Levon Helm, and Boz Scaggs. Today, James Alexander remains the only original member of the group.

The Bar-Kays were inducted to the Rhythm & Blues Hall of Fame in 2015, among other honors, and continue to perform and record regularly. They released their latest single, “Perfect Gentleman,” at the top of 2021.

Opening with a funky take on “Mary Had a Little Lamb,” this 1967 track marked the Bar-Kay’s debut single and their first big hit on the charts. To create a party atmosphere for the song, Stax songwriter and producer David Porter enlisted neighborhood teenagers to record chatter and jubilant shouts of “Soul Finger!” in the studio.

After recording the award-winning (and best-selling) soundtrack to Shaft with Isaac Hayes, the Bar-Kays scored a Top Ten R&B hit with this 1972 spin-off. Full of funky guitar licks, “Son of Shaft” was one of the group’s first singles to feature vocalist Larry Dodson.

Don't Stop Dancing (To The Music)

Released in 1969 on Stax subsidiary label Volt Records, the Bar-Kays’ Gotta Groove marked a triumphant return by a band reeling from tragedy after four members of the band were killed in a plane crash with Otis Redding in 1967. Surviving members Ben Cauley and James Alexander rebuilt the Bar-Kays with new musicians, and by 1969 they were back in the studio working with artists like Isaac Hayes. Gotta Groove was their first release with the new members and it stands as a testament to their resilience and talent. Highlights of the album include the psychedelic grooves of two-part song "Don't Stop Dancing (To the Music)," the jazz-tinged soul of Marvin Gaye cover, “If This World Were Mine,” and instrumental renditions of The Beatles’ “Yesterday” and “Hey Jude.”
BUY NOW